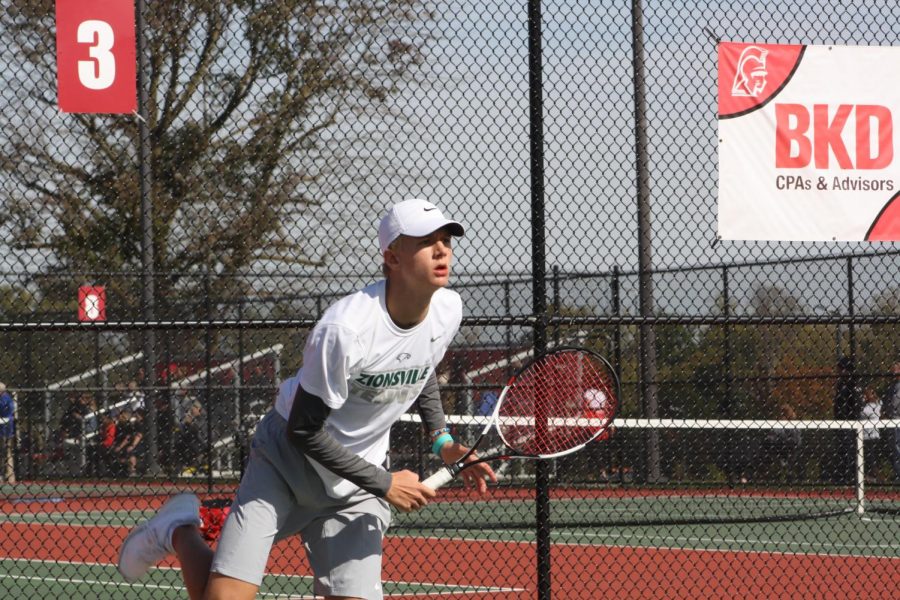 This year has been nothing but an exceptional one for the Zionsville Boys Tennis Team. As the season for the team as a whole came to a close at state finals on Friday, Oct. 18, the team had a great deal to be proud of and to look forward to in coming years. Competing at Semi state at Center Grove High School, The Eagles proved victorious over Center Grove, sweeping one of the singles and both doubles matches.

“I feel it was great. It was probably one of the biggest matches I’ve ever played in and one of the biggest wins I’ve ever had. I mean we’re state bound now and we can only go on so far. We’ve made it this far and I think we just have to keep strong and keep going and we can do great things with this,” Nick Winters, junior and No.2 doubles player, said.

When relaying his and his doubles partner, Senior Ethan Perry’s strategy to success, Winters is quick to credit the Eagles Varsity Coach, Earl Allen.

“Earl always told Ethan and I to be more offensive than the other team and to get to the net quicker,” Winters said.

The Eagles then advanced to state on Friday where they once again competed at Center Grove High School, in which they were unfortunately topped by North Central High School, who clinched the match, sweeping all three of the singles matches, as at No.1 singles, Cole Chappell lost to North Central’s Ian Brady 6-1, 6-3, as Zionsville’s Nick Bailey fell to Ajay Mahenthiran, who clinched the match 6-3, 6-4. At No.3 singles, Austin Kuklak lost to Marquis Willingham, losing 6-3 in both sets.

“He was just stronger than me. He hit the ball harder,” Cole Chappell, sophomore and No.1 Singles player, said.

Yet, the Eagles still managed to win both doubles matches. The No.2 Doubles Team of Ethan Perry and Nick Winters managed to pull out a victory in a nail biter of a match over North Centrals’ Carter Bailey and Daniel Ceglio, 6-3, 7-6, as they just barely stole the second set. Even as North Central had already clinched the match, having cleared the court of all singles matches, Winters and Perry fought hardily with grit to secure the match.

The No.1 Doubles team of Ryan Carr and Robert Campbell remain undefeated with a score equivalent to the No.2 Doubles team, holding a 6-3,7-6 victory over North Central’s Max Simmel and Richard Smikle. Their undefeated title has earned them a place at the state Doubles Tournament at Park Tudor on October 25, thus prolonging the Eagles season.

“[It takes] just a lot of hard work. Over the Summer we play four hours every day. It’s a lot of fun playing together. We just love to play. We’re a very cohesive unit and we love to set each other up. We just love being out there on the court together. No one’s really been able to stop us yet,” Carr, Junior and No.1 Doubles player said.

The team building developed between Carr and Campbell is key to their mindset on the court.

“One, it’s a skill set,” Campbell said. “We’ve both been playing for a really long time so that’s nice to have. Plus, it’s just our love for the sport in general. We just love to be on the court. It’s probably clearly seen because we’ve come this far. We actually balance each other out quite well with our advantages. He’s good at the net. He’s very aggressive. I’m a little more laid back. I tend to stay back more because I’m not as aggressive as Ryan but I can hit because I have pretty solid ground strokes,” Campbell said.

The skills which permits the duo to balance each other out has apparently worked in allowing them to remain undefeated for so long. It’s also their camaraderie which has permitted them to remain solid.

“A lot of people like to talk about how nervous are you going into big matches. Robert and I aren’t nervous. We’re just thinking about hitting big targets and just setting each other up. We’re out there to have fun. It’s just part of the season. We’re out there playing our game. We just wanna win,” Carr said.

Even with success of such magnitude, The team of Carr and Campbell still faces challenges.

“I’d say our biggest challenge is getting off to a good start. It’s really hard to do that. That’s our strong suit,” Carr said.

Despite Carr and Campbell’s winning streak, the varsity team as a whole’s season has ended, as North Central clinched all three singles matches.

“North Central’s got a lot of really good singles players. Ian[Brady], Ajay, Marquise, put a ton of work into playing a lot of tournaments. I think they just have more experience at those positions. Next year, we don’t really lose a lot of people. We can really grow in those positions. We keep a lot of our varsity guys and a lot of teams don’t. I’d watch out for us next year,” Carr said.

Despite the loss at state, the team still demonstrates great fortitude as well as development. By lasting until state, they’ve achieved greater success than in previous years, which is most certainly due to certain strengths presented by this year’s varsity team. It is such strengths which separates the varsity players from the junior varsity players.

“I’d say commitment. Over the Summer, me and Robert and Nick, Cole. Everyone on the Varsity Team. Especially during the Summer, they’re out there and it’s grind time. There are a lot of guys on JV who are alternates, Tyler Martin, Matthew Baluyut, Will Gregory. They put in the time as well. But it also comes with experience and playing tournaments. Just playing matches especially,” Carr said.

As the singles players played especially hard matches, many still have years to look forward to.

“I thought it was overall good moving forward. I thought we played really well but we played against a really tough team. I think we had a really great year overall,” Chappell said.