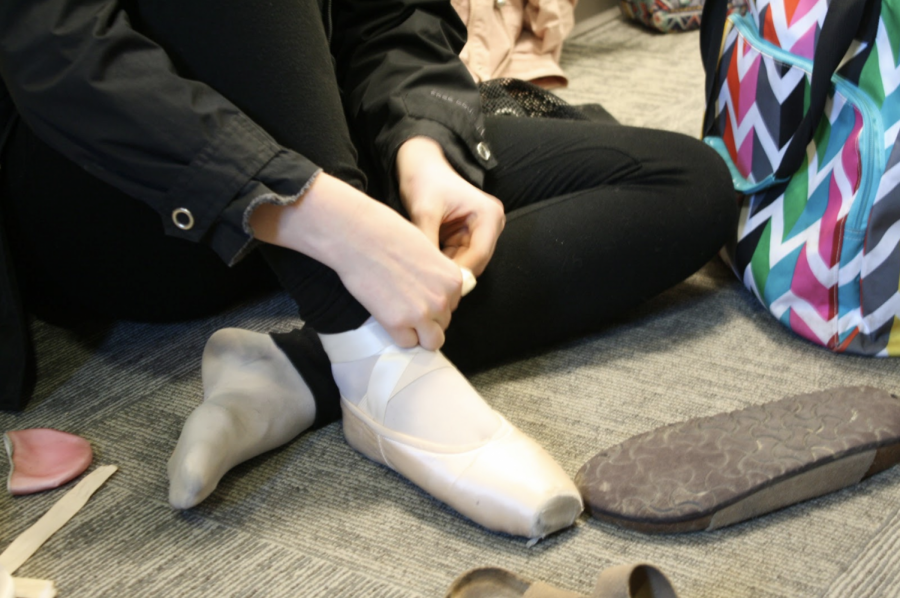 In the wings of the Monon Center stage, there is an almost tangible excitement. Ballerinas in pointe shoes and tutus wait anxiously to begin the run through of their upcoming show. This is the moment where months of their hard work will finally be seen in its entirety: costumes, hair, makeup, and, of course, dance.

For some, they have been dancing pointe for years. Others, like Elizabeth Arnold, Freshman, have started as recently as this year.

“When it gets to the end and everybody knows their dance, we do a full run through,” Arnold said.

The rehearsal isn’t as simple as it sounds. Ballets are long, around two hours on average, and dress rehearsals can take almost twice that.

“[Our teachers] will be like, ‘Okay, one more time’, and five runs later, they’ll say ‘One more time’,” Arnold said.

Dancing pointe isn’t only about long dress rehearsals for big performances, though. A major part of it is discovering the strength of the dancer’s body, and what works for them.

“You have to have enough strength in your ankles before they allow you to do [pointe],” Brooke Hanson, 9, said. “I have extra bendy ankles, so I need [a pointe shoe] that would support everything up.”

Despite her struggles, Hanson has not had any pointe-related injuries. However, that is not the case for all ballerinas. According to a study done by Ronald Smith, a psychology professor at the University of Washington, over an eight-month period, the injury rate for ballet injuries was 61 percent.

To avoid dance-related injuries, dancers do not begin their journey at pointe, and in the beginning, they are only allowed to dance for 30 minutes at a time on pointe. However, if a ballerina isn’t inclined to transition into the rigor of dancing on pointe, she has the opportunity to continue with what is called ‘flat ballet’, or dancing with regular ballet slippers. She can also pursue other types of dance.

“There’s definitely other styles of dance you can go into,” Arnold said. “I really like doing different styles of dance. It’s challenging because you turn out for modern dance and ballet, but not for jazz. It’s very different, the muscles you use for each style of dance.”

If a dancer decides she would like to transition from flat ballet to pointe, the road can be equally thrilling and confusing.

“[Getting pointe shoes] was really exciting and kind of nerve-wracking,” Arnold said. “I was like, ‘what is this, what does this mean?’. There were a lot of questions, but a lot of them get answered. They would bring out all these different types of pointe shoes, and you try them on. They’re meant to feel squished, but not crammed.”

Even though dancing on pointe has the potential to be a very competitive environment, Arnold doesn’t give in to the pressure.

“The best thing is, you feel almost powerful. I think being up on your toes and dancing to what you think is the best of your ability is powerful,” Arnold said.